– The 5 Essentials to Get You Started – 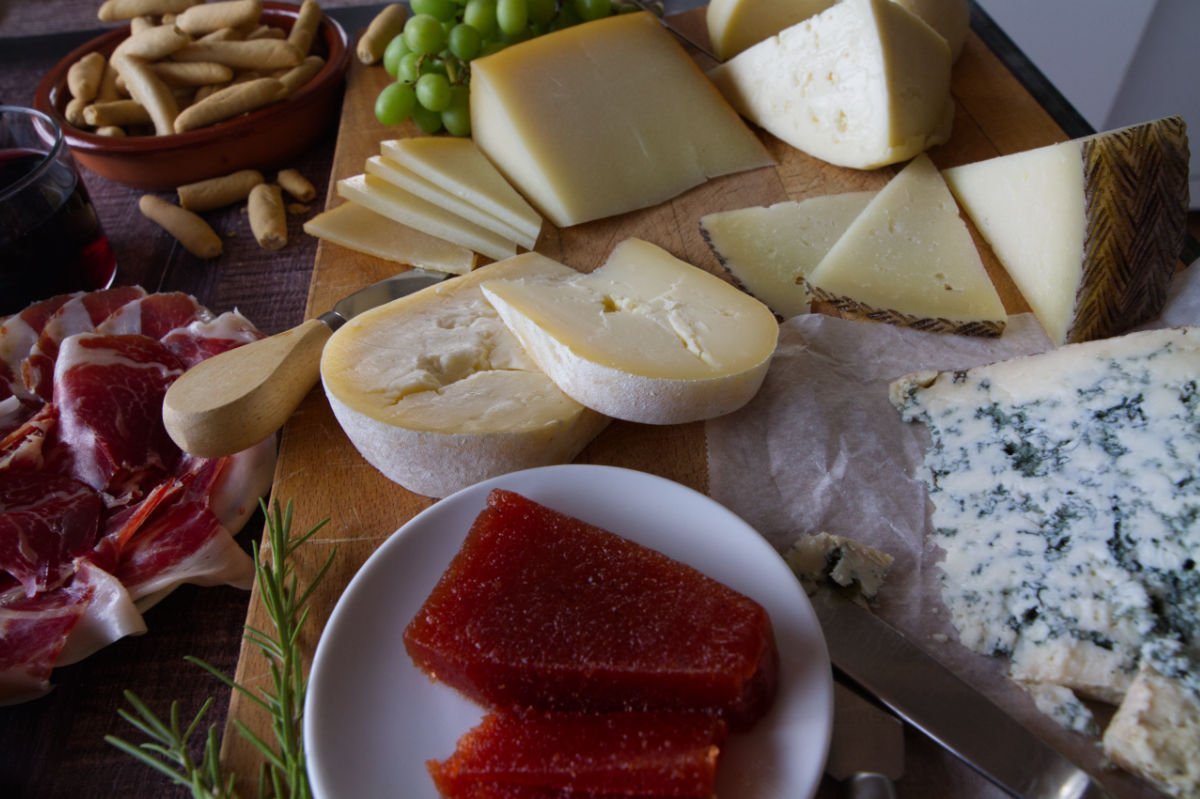 Exploring the various types of Spanish cheese is a pure delight to the tastebuds. From the mountainous northern reaches that offer smooth and creamy cow’s milk cheese such as the Idiazabal and tetilla cheeses, to the central plains of Castilla La-Mancha, where award-winning manchego cheese can be found abundantly.

Let’s start by saying that if you’re a cheese lover (like us) then all cheese is incredible, but venture into the vast selection of award-winning Spanish cheeses and it’s no wonder that more and more Spanish cheese is ending up the favorite of the international cheese board!

This guide is to give you an introduction to some of the tastiest and most-loved types of Spanish cheese. It’s by no means an exhaustive list, but it’ll certainly point you in the right direction the next time you’re making a cheese board!

There are more than 100 varieties of Spanish cheese hailing from a range of regions throughout Spain, with each region having their own style. Perhaps, the most iconic factor that sets Spanish cheese apart from its famous cheese-producing neighbor, France, is the type of milk used for the production of Spanish cheese. Spanish cheeses are often made from a blend of cow, goat, and/or sheep’s milk.

Cow’s milk is the most commonly used in French cheese, although they also offer up sheep and goat’s milk in their more than 1,000 varieties!

In Spain, you can typically break down cheese production into three main regions: 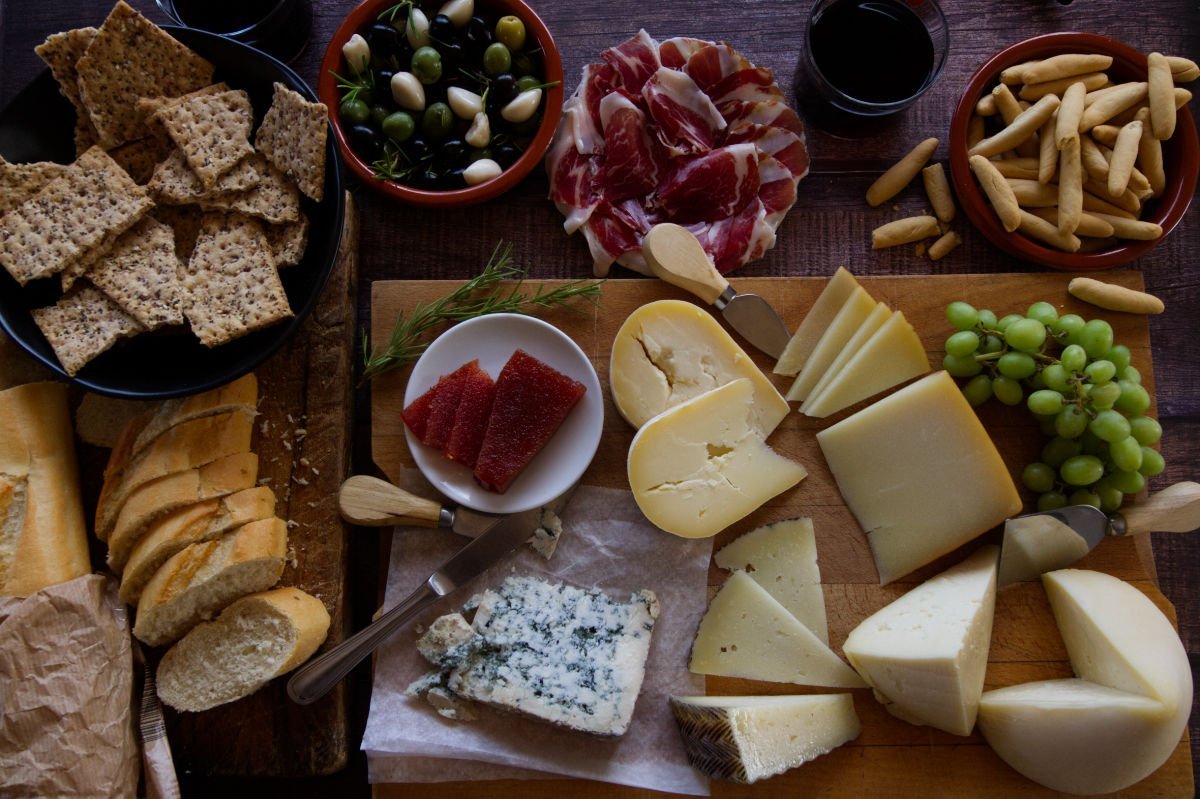 Here’s a simple table to quickly compare the 5 most common Spanish cheeses:

Let’s take a deep dive at five of the most popular cheeses and hence, some of the most common Spanish cheeses produced. We’re also going to throw in a freebie at the end because it’s one of our favorites and rarely features on any other ‘best-of’ or ‘classic Spanish cheese’ lists.

It’s a mystery why, as it’s found everywhere in Spain and we are rightfully making it our quest to share this cheese wisdom and make it a worldwide phenomenon.

Our list of 5 essential types of Spanish cheese features: 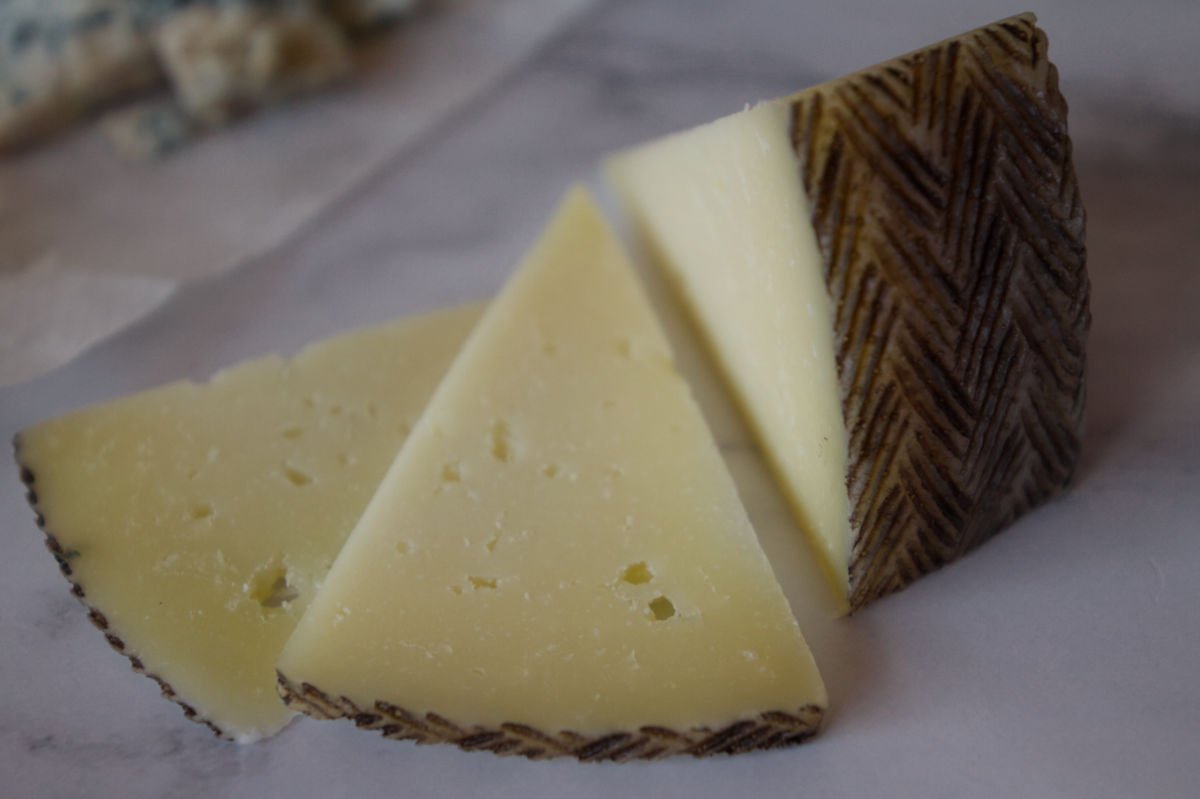 There are other stipulations too that gave Manchego cheese its Protected Designation of Origin (PDO) status. The most important aspect to note from a cheese-lover’s perspective is its nutty but buttery flavor. This combination of sweet and salty makes it a standalone tapas dish. You’ll often find it served in slices with a drizzle of good quality extra virgin olive oil. 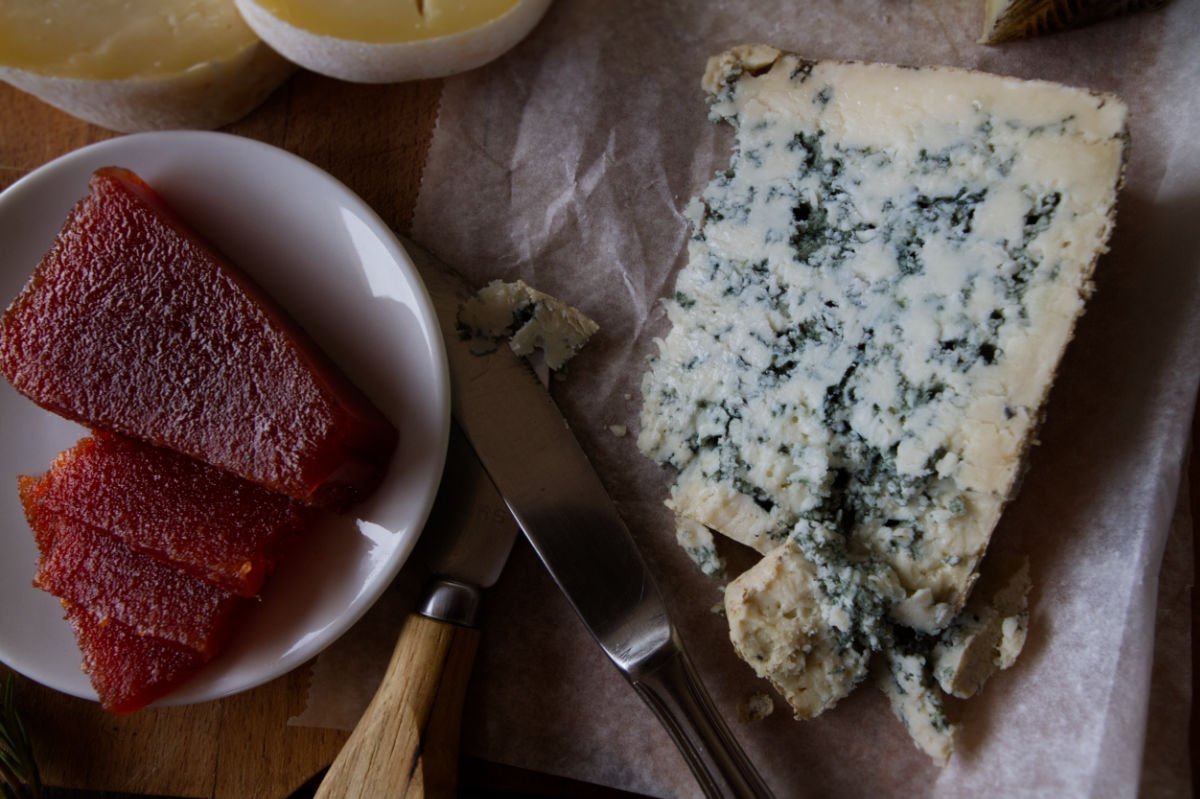 Cabrales cheese (Queso Cabrales) is one of the more punchy varieties found in Spain. It’s a blue cheese that comes from the Asturias region specifically, Picos de Europa National Park (a breathtaking mountain region). It’s cured in caves and can be made of cow’s milk alone or mixed with goat’s and/or sheep’s milk.

There are different levels of sharpness, for example, cabrales suave (translates as cabrales “gentle” or “soft”) is a beautiful blend of that strong blue flavor but soft and gooey and tastes incredible when smothered on fresh bread, sprinkled on salads, or used in baked dishes. 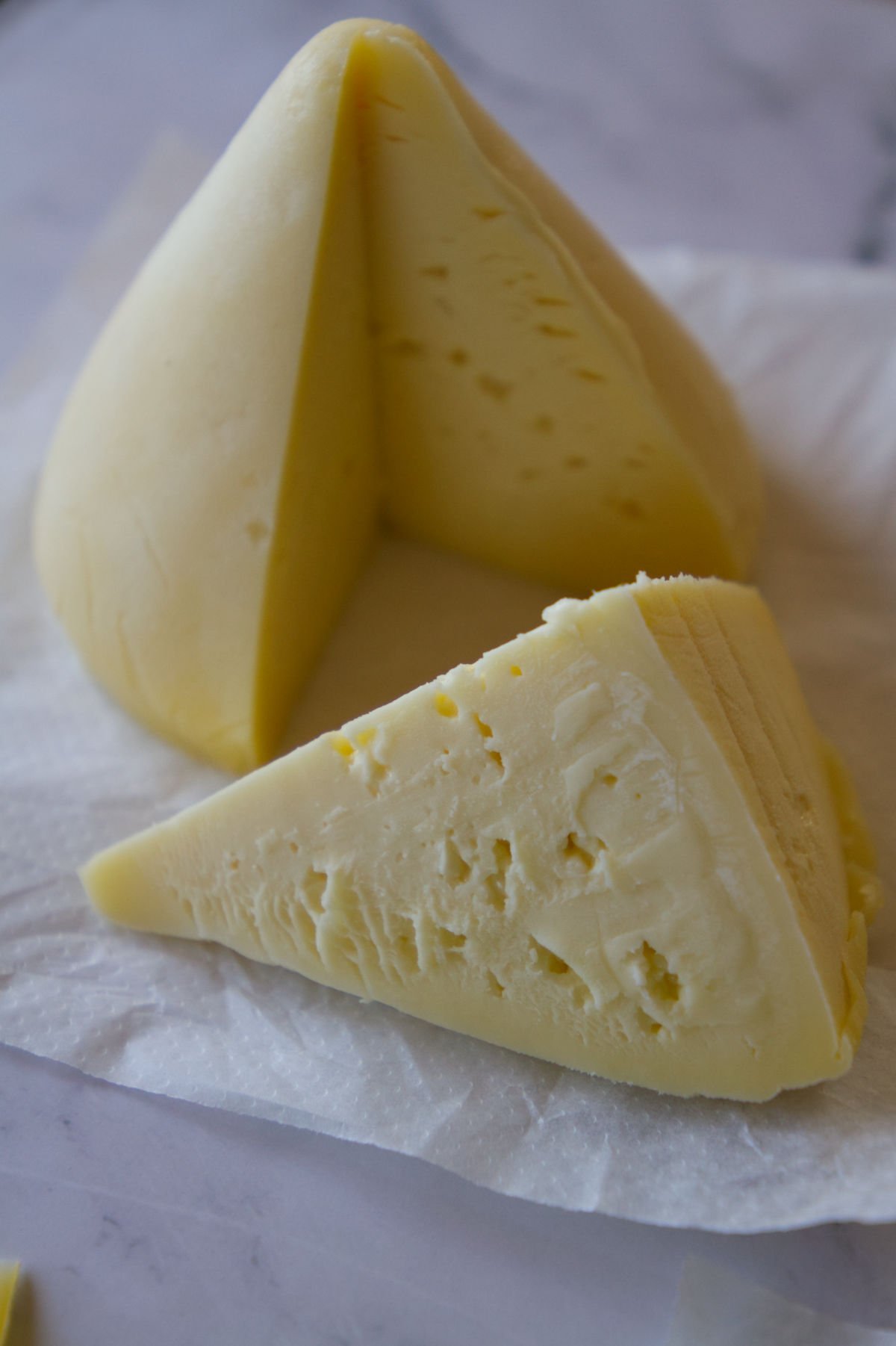 Tetilla cheese (Queso Tetilla) is a gastronomic delight from the Galicia region. Its name “Tetilla” means nipples in Spanish and is an ode to the shape of this cheese. It’s made from cow’s milk and from specific breeds of cattle in Galicia.

Its flavor is quite mild and the texture is soft but creamy. Tetilla cheese is often eaten as a dessert or used in recipes that call for melted cheese. 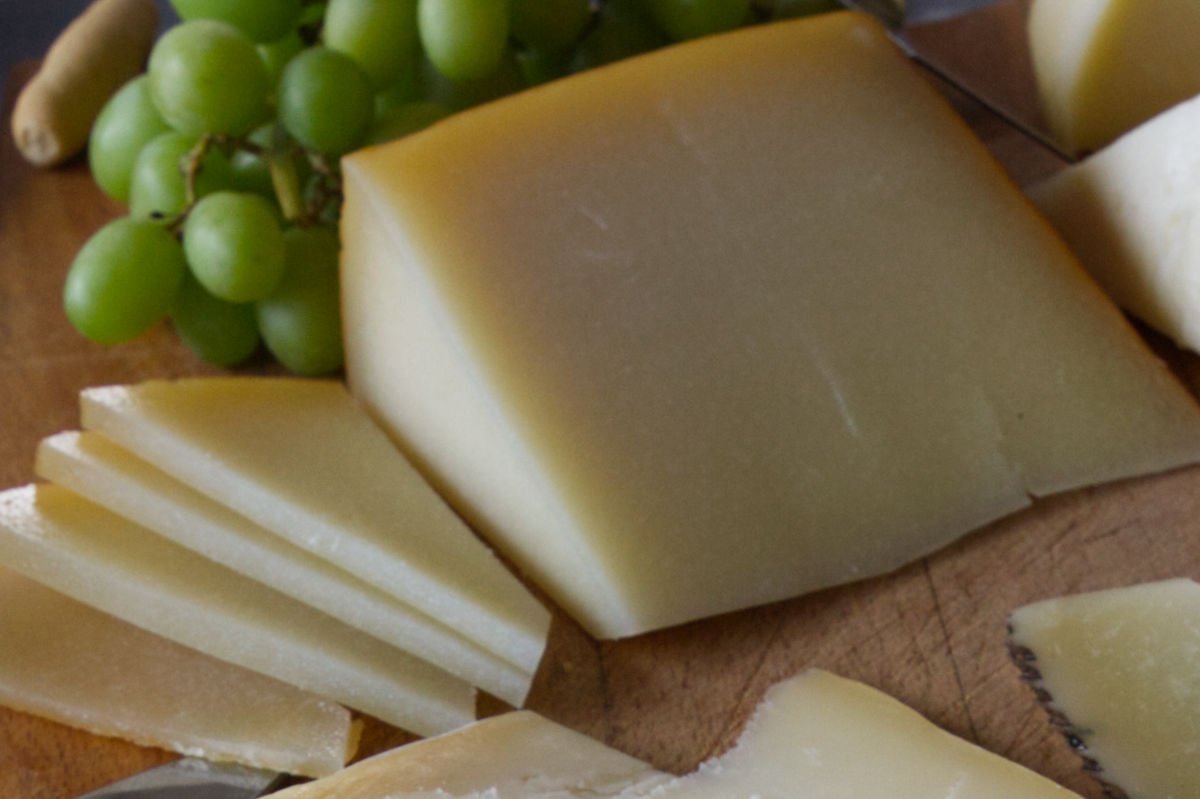 Idiazabal cheese (Queso Idiazabal) comes from the Basque Country and Navarre. It’s made from raw sheep’s milk and is aged for at least two months and ranges from semi-cured to cured. This makes it a hard cheese so can be enjoyed alone as slices or with quince paste (“membrillo” in Spain).

Once it is aged, Idiazabal is sometimes smoked using wood from trees such as the beech tree or white pine. If it’s smoked it will have a brownish color, whereas the unsmoked varieties will be a light beige color.

Mahón cheese (Queso Mahón) is a white cheese produced from cow’s milk on the island of Menorca in the Balearic Islands. It was named after the port of Maó (Catalan) / Mahón (Castellano).

It can be described as a sweet and fruity cheese but still has a mildly salty flavor since the cows graze on grass that has traces of sea salt. The rind is typically rubbed with oil and paprika which leaves the younger and softer cheeses with an orange-tinged rind.

This cheese is the bonus one we mentioned. Not nearly as common (outside of Spain) but an absolute delight, it’s worth sourcing this if you can. It’s literally cheese that’s been aged with rosemary leaves covering it which infuses to give it a subtle but delectable nutty and sweet flavor.

You’ll find a variation in every supermarket and market in Spain. Perhaps it doesn’t make any top lists because it’s not region based and can be classified more as a traditional production method (although many argue it’s from Castilla-la Mancha and originally made with Manchego). These days, many cheese producers have their own spin on this.

The common theme that sets this cheese apart is the rosemary. Plus, it is nearly always made with sheep’s milk, which combined, gives it a distinctive flavor. This cheese needs no accompaniment (bread or otherwise) and is best to just pop a slice in your mouth alone, which is simply the best way to savor it.

What is the most popular cheese in Spain?

Manchego is the most well-known cheese that Spain produces. It’s made from sheep’s milk which is popular in Spain and Manchego is often served as a tapas in bars and restaurants. Some other popular cheeses include Cabrales, Idiazabal, Tetilla, and Mahón.

What is the best Spanish cheese?

At the Gourmet Cheese Championship in 2022, Olavidia, by Quesos y Besos, was awarded the title of “Best Spanish Cheese”. It’s made with goat’s milk from Malaga that’s matured between 15 and 20 days and has an intense smell and flavor.

How many types of Spanish cheese are there?

There are more than 100 types of Spanish cheese produced. There are 26 kinds of cheese that have been granted Protected Designation of Origin (PDO) status. Spanish cheeses often use a blend of two or more types of milk (cow, sheep, or goat).

What is fresh Spanish cheese?

Spanish fresh cheese (Queso Fresco) refers to cheese that isn’t cured or aged. As a result, it’s a soft cheese that has a mild flavor (although sometimes salty). Rather than being eaten by itself, this cheese is used in recipes or as a topping on dishes.

What are the types of cheese in Spanish?

There are three overarching categories of cheese in Spain: 1) Fresco (fresh) hasn’t been cured or aged; 2) Semi-curado (semi-cured) is usually only aged a couple of months; 3) Curado (cured) has been aged the longest and is usually harder and more intense.

Where can I buy Spanish cheese?

Many supermarkets or specialist grocery stores around the world stock at least some Spanish cheeses. You’ll likely find the best selection online, so look for a dedicated Spanish food stockist (e.g. La Tienda) that delivers to your area.

Want to keep reading about produce from Spain?

Of course, you cannot mention Spanish exports without the mention of olives, and more specifically, olive oil. Spain is the largest producer of olive oil in the world (by a long stretch) and most of that olive oil is grown and made in the southern Jaen region within the communidad of … [Continue reading] 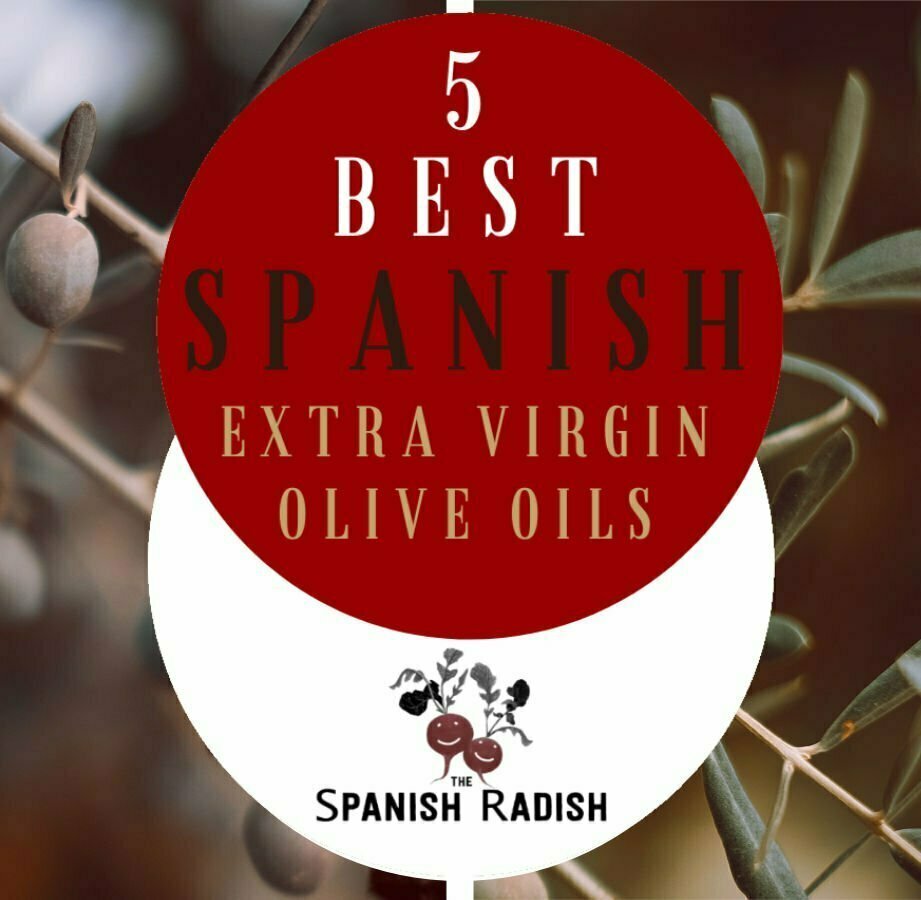